Webkinz Wiki
Register
Don't have an account?
Sign In
Advertisement
in: Lions, Pets, Pet of the Month,
and 4 more

HM5103
The Rockerz Lion, or the Rock n' Roar Lion, is a regular Webkinz pet that was released in June 2012 and is part of the Rockerz line of pets. It is not retired and was Pet of the Month for January 2016. Its pet specific item is the Shock Rock Stage Flare and its pet specific food is the Heavy Metal Meatballs.

Like other Rockerz pets, the Rockerz Lion includes two backstage passes and a pet-specific outfit for adoption gifts. The outfit for this pet consists of a Rockerz Headbanging Bandanna, Rockerz Leather Jacket and Rockerz Purple Stomping Boots.

"The Webkinz Rockerz Lion always sets the stage for a great performance with their roaring vocals! Nothing helps to amp up their show like the perfect pyro provided by their Shock Rock Flare! Keep the growl in their voice and away from their stomach by serving up their favorite meal, some Heavy Metal Meatballs!"[1]

The Rockerz Lion is a yellow bodied lion with a purple tail tip and mane that has a black stripe from its forehead to the back of its mane. The pet also has a black and purple band on its left front leg, and it has black claws with light purple paws. It also has a white muzzle, purple eyes, small black eyebrows and a triangular black nose with its snout and inner-ears being a slightly darker yellow. Its tattoo on the left side of its rear says "Rock n' Roar" on a banner with a red heart with white lines protruding from it behind the scroll, and there are yellow and black music notes around the heart. In its plush form, it has white foil-like speckles all over the pet's yellow body. 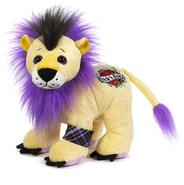 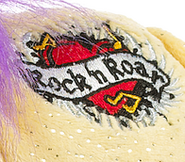 The tattoo on the plush 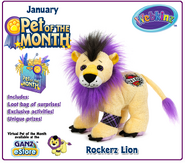 Pet of the Month promo image 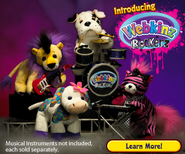 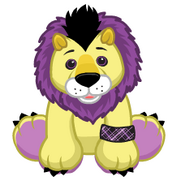 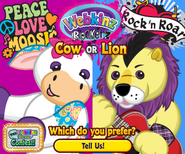