The Rockerz Poodle is a Webkinz pet that was released in October 2012. It doesn't have a Lil'Kinz version. It has not been Pet of the Month. It isn't retired. Its pet specific item is the Disco Dance Floor and its pet specific food is Disco Ball Cereal.

Like the other Rockerz pets, the Rockerz Poodle comes with two backstage passes and an outfit. The outfit for this pet consists of the Funky White Hat, the Groovy Disco Jacket, and the Groovy Bellbottom Leather Pants.

The Rockerz Poodle has a brown body with curly black hair on its head, the bottom of its ears, and on its ankles. It has black eyes with pink eyelids. The inside of its ears are white with silver sparkles. Its feet and the end of its tail are also white with silver sparkles. It wears a gold scarf around its neck. Its side says "Groovy" in pink and purple letters surrounded by music notes.

Get your groove on with the Webkinz Rockerz Poodle! This dog likes to get down and boogie on their very own Disco Dance Floor! And when they get hungry, make sure you feed their disco fever with some Disco Ball Cereal! 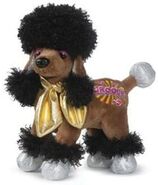