HM5109
The Rockerz Raccoon is a Webkinz Rockerz pet that was released in December 2012. It doesn't have a Lil'Kinz, it isn't retired, and hasn't been Pet of the Month. Its pet specific food is the Purple Velvet Glam Cakes and its pet specific item is the Pyro Performance Stage.

Like the other Rockerz pets, the Rockerz Raccoon comes with two backstage passes and an outfit. The outfit for this pet consists of the Glam Rock Face Sticker, the Glam Rock Jumpsuit, and the Glam Rock Platform Boots.

You’ll want to rock all night with the Webkinz Rockerz Raccoon! This gorgeous glam critter loves to put on a show that will blow your mind from their Pyro Performance Stage! Just make sure you stock up their dressing room with lots of Purple Velvet Glam Cakes to keep them from storming off stage! 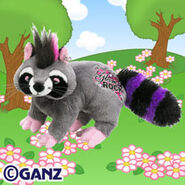