HM023
The Seal was released in November 2007. It isn't retired, has a Lil'Kinz version and wasn't Pet of the Month. Its pet specific item is the Icy Ocean Bathtub and its pet specific food is the Bubbly Fish Pop.

Where is the seal happiest? Swimming around in a pool, of course! But there's much more to the seal than simply swimming - this fantastic friend also loves to visit Quizzy's, hang out in the Clubhouse and visit the Tournament Arena for a game or two. It's a done deal - time to adopt a seal! 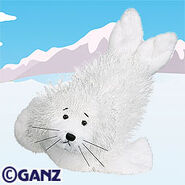 Bubbly Fish Pop
Add a photo to this gallery
Retrieved from "https://webkinz.fandom.com/wiki/Seal?oldid=47143"
Community content is available under CC-BY-SA unless otherwise noted.