The Signature Border Terrier is one of the Signature Pets. It was released in July 2013. It doesn't have a Small Signature version. It has not been Pet of the Month. It isn't retired. Its pet specific item is the Around the World Plane and its pet specific food is Continental Barkfast.

The Signature Border Terrier has light tan fur. Its muzzle and chest fur is slightly lighter than the rest of its body. Its ears are dark brown with light brown insides. It has brown eyes with large black pupils. Its nose is black.

Embark on a spectacular journey with the Signature Border Terrier! This adventuresome pup loves flying around the globe and enjoying their traditional Continental Barkfast whenever they can! And once they're set for takeoff, nothing can stop them hopping on their personal Around the World Plane to soar to their next dynamic destination! 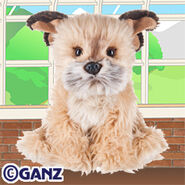 Around the World Plane