The Red Wolf can sniff out a great friend from a mile away! With its attentive ears and exquisite coat, this awesome pet is always up for an outdoor adventure. If you can, catch the Red Wolf venturing out to its Endangered Island Getaway while taking brief breaks to indulge in a Root Deer Float.

It is brownish red on its fur. Its paws are tan and has pointy ears. 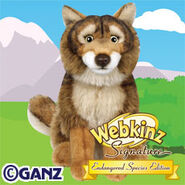