The Signature English Bulldog is one of the Signature Pets. It was released in December 2013. It doesn't have a Small Signature version. It has not been Pet of the Month. It isn't retired. Its pet specific item is the Double Decker Bus Bed and its pet specific food is Great Puppy Poundcake.

The Signature English Bulldog is white and brown. One of its ears is white and the other ear is brown. It has brown eyes with large black pupils. Its nose is black. The area around its mouth is black.

Great Scott! It's the Signature English Bulldog! You'll have a smashing good time with your new friend as you explore their brave new world together! When this posh pet gets knackered after a jolly good day of play, steer them straight toward their magnificent Double Decker Bus Bed, a symbol of their beloved homeland! And when it's time for afternoon tea, be sure to serve them a whole Great Puppy Poundcake, a monumental dessert fit for royalty! Cheerio!

This pet was the last Signature pet to be released. 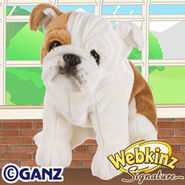 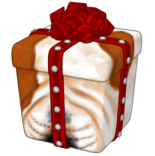