The Signature King Charles Cocker Spaniel is one of the Signature Pets. It was released in April 2012. It doesn't have a Small Signature version. It has not been Pet of the Month. It isn't retired. Its pet specific item is the Palatial Platform and its pet specific food is Royal Feast.

The Signature King Charles Cocker Spaniel is white and medium brown. It has white spots on its back. Its eyes are brown with large black pupils. It has a brown nose. Both sides of its face are brown, but its muzzle and forehead are white. It has long fluffy brown ears and a fluffy white tail.

All hail the king! The Signature King Charles Cocker Spaniel is a noble friend who enjoys looking over their kingdom from their Palatial Platform. And when it comes to supper time, nothing is more sumptuous than their regal Royal Feast! 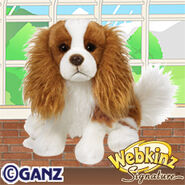 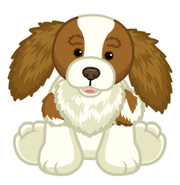 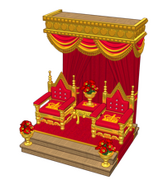 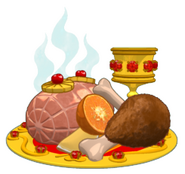