Who doesn't love a Pomeranian?! This precious pet can charm its way into any heart. Be careful not to judge this tiny pooch by its stature as its tastes are grandiose. Signature Pomeranian requests Royal Supper as its meal of choice. This little Pom is one proud pup and loves to commission Royal Pup Portraits to decorate its residence.

The Signature Pomeranian is covered in long golden fur, with a lighter chest and face. It has brown eyes and a brown nose. Its ears and face have shorter fur than the rest of its body. 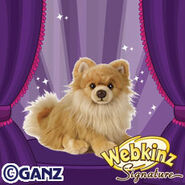