The Signature Siberian Husky is one of the Signature Pets. It was released in January 2012. It doesn't have a Small Signature version. It has not been Pet of the Month. It isn't retired. Its pet specific item is the Northern Research Igloo and its pet specific food is Alaskan Baked Salmon.

The Signature Siberian Husky is white and dark gray. It has blue eyes with large black pupils. Its nose is black.

If you're looking for a little more Northern exposure, look no further than the Signature Siberian Husky! This diligent dog is happy to be stationed in their Northern Research Igloo, especially when it's time for a healthy and hearty meal made up of some Alaskan Baked Salmon! 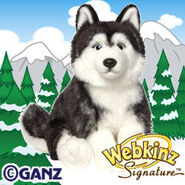 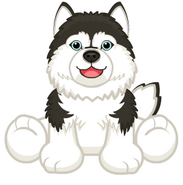