The Signature Snow Leopard is one of the Signature Pets. It was released in August 2013. It doesn't have a Small Signature version. It has not been Pet of the Month. It isn't retired. Its pet specific item is the Alpine Cave and its pet specific food is Cozy Cocoa.

The Signature Snow Leopard is gray. Its chest fur and muzzle are off white. It has dark gray spots. Its ears are black with white insides. Its nose is pink. Its eyes are brown with large black pupils.

Cozy up to the beautiful Signature Snow Leopard! No stranger to the cold winds of their northern habitat, this sleek cat warms up on winter evenings with a hot cup of Cozy Cocoa! And whether they're keeping a watch over their lands or simply taking a rest, you'll often find them deep in the wilderness enjoying the view from their pristine Alpine Cave! 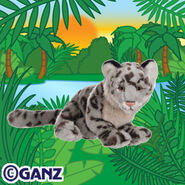