The webkinz Skunk was released in August 2008. It does not have a Lil'Kinz version, was retired and was pet of the month in May 2010. It was featured in the video Misunderstood.

It comes with its pet special item, Black and White Skunk Fridge and its special food Toadstool Fritter. It also appears in the game Hide N' Skunk (Also known as Skunksweeper).

Black and white and totally all right...that's the super Skunk! Skunks are friendly and exuberant and love to hang out with lots of pals. Skunks also enjoy the occasional quiet day at home. Decorating, baking, and simply chilling out makes a Skunk very happy!

The Skunk is black with a white stripe going from head to tail. It has a little black stripe on the its tail. 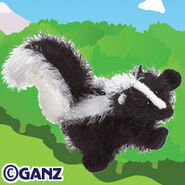 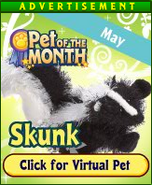 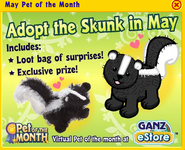 Retrieved from "https://webkinz.fandom.com/wiki/Skunk?oldid=35639"
Community content is available under CC-BY-SA unless otherwise noted.