HM012
The St. Bernard is a Webkinz pet that was released in May 2005. It's retired, wasn't Pet of the Month, and has a Lil'Kinz version. Its pet specific food is the Bacon Bone and its pet specific item is the Ski Lodge Fireplace. The St. Bernard was retired in August 2007, but the Lil'Kinz is still available.

The St. Bernard is more hairy on the back than on the front like many other Webkinz pets.

Faithful to a fault, the St. Bernard would brave snow blizzards and rainstorms to be by your side. That is unless there's a Bacon Bone anywhere nearby - because that's its all-time favorite food! Regardless of who or what this pooch is braving the elements for, they make an all-time favorite pet. 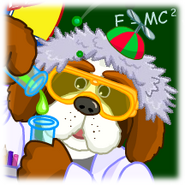