Stoogles is male Googles who is a member of the 'Kinz Crew.

Although his page in the Kinzapedia on the Webkinz Newz site does not exist anymore, according to what can be found through the Wayback Machine, Stoogles was described by Ganz as such:

"Stoogles made his first appearance as the only Webkinz in town who liked Salley Cat – he was kind to her and she believed in him. Salley and Stoogles have remained fast friends and Stoogles is now part of the ‘Kinz Crew. He is known for his strong opinions (which sometimes contradict what everyone else wants to do), and for being just a teeny bit bossy. He’s the life of the party and quite the talented dancer."[3] 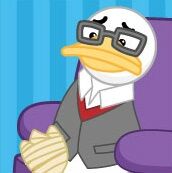 Stoogles with a broken flipper 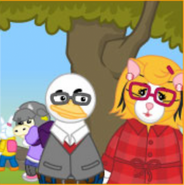