The Webkinz Tree Kangaroo was released in February 2010. It does not have a Lil'Kinz version and it's not Retired. It has been Pet of the Month for July 2013. Its Special food is the Tropical Fruit Flan and its special item is the Remote Rain forest.

You'll want to jump at the chance to adopt the new Tree Kangaroo. Boisterously bouncing about, this mirthful marsupial is always happy to hop its way around Webkinz World! And when the Tree Kangaroo all tuckered out, it loves to taste Tropical Fruit Flan and relax in its Remote Rainforest. 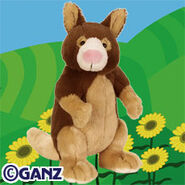 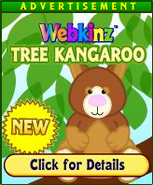 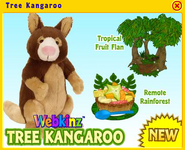 Part of the Ad
Add a photo to this gallery
Retrieved from "https://webkinz.fandom.com/wiki/Tree_Kangaroo?oldid=38195"
Community content is available under CC-BY-SA unless otherwise noted.