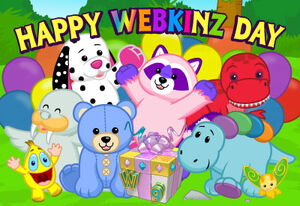 There have so far been 15 Webkinz Days hosted since 2006. Each year, events take place near the end of April and various prizes are won, including the Webkinz Day Gift Box prizes and Super Wheel prizes.

Webkinz Day was first celebrated on April 29th of 2006. With it, the Super Wheel was introduced and unique login prizes were rewarded for the first time to each player who signed in that day. Unfortunately, the Super Wheel prizes for that year were never properly documented.

Wish Tokens began to be rewarded to players for Webkinz Day. This year also marked the beginning of the Webkinz Day Extravaganza, which would take place again in 2009.

-Wow! You've won the Red Ming Lantern from the estore!!!

-This statue is as royal as it looks!

-Add Wartmth to the dr of your neo gothic room!

-Give your brain a break and sit in this Thinking Chair

Conquer The recipe of the superstinachew with this stove!

- Time to clown around! You've won the exclusive clown car!

Only the most advanced clowns need this wig!

BOO! You've got a Haunted Painting in the house!

CAUTION! YOUR CLOTHES MIGHT CATCH ON FIRE FROM THIS ROYAL LAMP

A shiny new gumball machine, filled to the brim with chewy gumballs!

Cook up some grub with this cool cookery!

A fantastic and fabulous mirror that gives sage advice when clicked on!

NOTE: THIS WAS THE FIRST WHEEL KNOWN AS THE UNSUPER WHEEL

Look at all these wonderful pink pillows while napping like a princess on this royal neo gothic couch!

BEAUTIFUL! It's flower heaven when you place this Delicate fountain in your backyard,

Pinkify your room with this small looking but large rug

Clown around with this funky neon afro! NOTE: THIS UNSUPER PRIZE WAS USED TWICE IN A ROW!!

Swim around this winter with your brand new tub

Time to grab some strawberries with this amazing prize

NOTE: Some players have also complained about this being the return of the unsuper wheel series