HM156
The Whimsy Dragon is a Webkinz pet that was released in May 2008. It hasn't been Pet of the Month, isn't retired, and doesn't have a Lil'Kinz version. Its pet specific food is the Flickering Flame Fajitas and its pet specific item is the Treasure Throne.

"Dragons are mighty, mythical creatures; in fact, some people believe dragons are even a bit magical! One thing is for sure; this Whimsy Dragon is a perfectly pink pal, waiting to meet a friend like you. Whimsy Dragons absolutely love to learn, play, and explore Webkinz World!"

The Whimsy Dragon has soft pink fur with baby blue patches. Its belly, ears and nostrils are glittery hot pink. Its claws, spikes and wings are dark pink and have a slightly more purple hue. 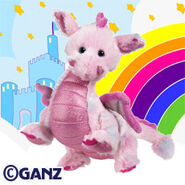 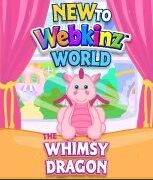