HM614
The White Tiger is a Webkinz pet that was released in January 2012. It retired in November 2014, it doesn't have a Lil'Kinz, and hasn't been Pet of the Month. It comes with a Jungle Cat Perch and Roaring Steak Tartare. It was voted to be the second greatest Webkinz after the Timber Wolf.

The White Tiger is one kitty that loves to prowl! But when they are ready for a rest, have them sit high above on their Jungle Cat Perch! If you want to catch the eye of this Tiger, make sure you serve them some tasty Roaring Steak Tartare! 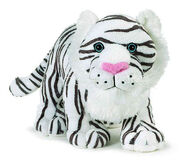 PSF
Add a photo to this gallery
Retrieved from "https://webkinz.fandom.com/wiki/White_Tiger?oldid=48950"
Community content is available under CC-BY-SA unless otherwise noted.