The Wintermint Husky is a Webkinz pet that was released in December 2014. It doesn't have a Lil'Kinz version. It has not been Pet of the Month. It isn't retired. Its pet specific item is the Northern Nights Fireplace and its pet specific food is Wild Mint Tea.

The Wintermint Husky has white fur. Its legs, paws, and the insides of its ears are light blue. It has blue eyes with large black pupils. It has black markings around its eyes. Its nose is black.

The wild Wintermint Husky is ready to explore! Help keep them warm on frosty Arctic evenings with a beautiful Northern Nights Fireplace. Want to make them even cozier? Steep a delicious cup of Wild Mint Tea, a comforting taste of home! 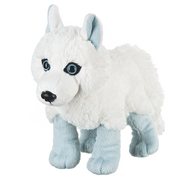