The Zombie Pup is a Webkinz pet that was released in August 2014. It doesn't have a Lil'Kinz version. It has not been Pet of the Month. It isn't retired. Its pet specific item is the Cozy Coffin Bed and its pet specific food is Putrid Pudding.

Rawr! The Zombie Pup has awoken! Despite their ghoulish look, this puppy is a sweetie at heart. In fact, they love taking naps in their Cozy Coffin Bed! And when it’s time for some tasty dessert, they always reach for their Putrid Pudding first! 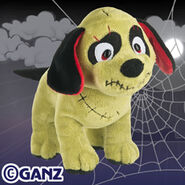 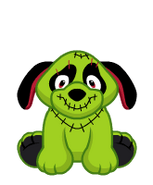 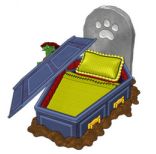